Recovery after an intense physical activity is often accompanied by pain, swelling and decreased ability to move. The symptoms are a part of the injury-response of the body, called inflammation. Although it is considered to be of evolutionary importance, prolonged inflammation can cause unwanted problems, especially when on a strict training schedule. Decreasing it can therefore aid recovery. Only a thorough understanding of the underlying process can reveal a path towards decreasing the negative inflammatory effects thus allowing for an educated decision on how to alleviate them.

Inflammation is an inherent tissue response and plays a major role the body’s defense against harmful microscopic organisms. Higher organisms, like humans, have additionally evolved mechanism that not only detect and fight the pathogens in the tissue, but also react to damaged host cells.

In order to be efficient, inflammation happens in sequential steps that allow the organism to address the scope of the damage and prepare the adequate response. Each step of the inflammatory process is designed to prepare the organism for a timely recovery.

Can u describe the step by step more clearly in the schema (put numbers 1, 2 ,3 for the diferent steps) make schema full page so one can read.
Can you insert content on the endothelial cells swelling and occlusion of the capillary beds 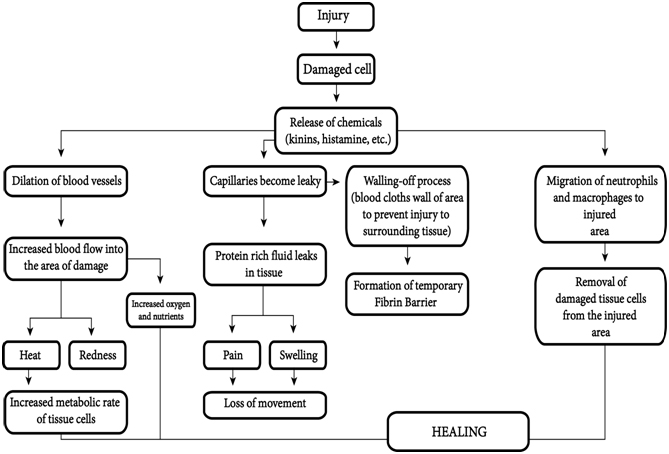 The main function of the inflammatory process is to detect the damaged tissue and start the procedures to repair them before more damage is caused. When the external stimulus results in cell damage, a particular chain of reaction is initiated in order to secure the tissue.

When the injury occurs and the tissue cells get damaged, special chemicals called the inflammatory mediators are released in the blood stream. They cause the expansion of blood vessels which allow the white blood cells, the erythrocytes, to enter the injured area. Because the blood level in the tissue is increased, the damaged area becomes red and hot.
Look at attached , what about endothelial? I thought you d get occlusion from the swelling of the endothelial cells resulting in occlusion of bllod flow to the locally inflamed capillary beds .with that reduction of blood flow you could slow the healing process. Kinins and histamine that are released when the injury occurs cause the capillaries to become permeable, allowing the protein rich fluid to leak in the tissue. Due to the formation of the temporary Fibrin Barrier, which protect the healthy surrounding tissue, the fluid stay in the damaged area causing swelling.

Injured muscle and twisted joint also hurt, because the released hormones can irritate the nerves and enhance pain signals sent to brain. These physical reactions are meant to stop the organism to continue the damaging activity thus preventing the further development of trauma.

Oxygenated and nutrient reach blood fasten the metabolic rate of tissue cells thus initiating the healing process. To be as efficient and complete as possible, the neutrophils and macrophages, specialized types of white blood cells, remove damaged tissue cells from the injured area. This process may cause the formation of pus in the tissue but it is essential for clearing the area of debris.

How cryo helps reducing inflammation (by promoting blood flow to inflamed areas and removing wate and delivering newly filtered, oxygenated, and nutrient filled blood to the body including inflamed areas.

Then describe why cryo helps reducing inflammation (by promotiin blood flow to inflamed areas and removing waste and delivering newly filtered , oxygenated , and nutrient filled blood to the body including inflamed areas
The Dangers of Inflammation
While the inflammation is the body’s natural response it is not always beneficial for the organism. In particular cases the body can start fighting against its own healthy cells. Such a harmful inflammatory response can lead to development of autoimmune pathological disorders including:

The causes of chronic inflammation disorders are many and various in type. A preparation of the body and vitalization of the immune system is recommended in order to avoid them. Whole-body cryotherapy offers itself as a beneficial measure to strengthen the body, making it resistance for such harmful developments. By providing an outside support for the body’s naturalresponse it can help to manage negative and promote positive inflammatory effects.